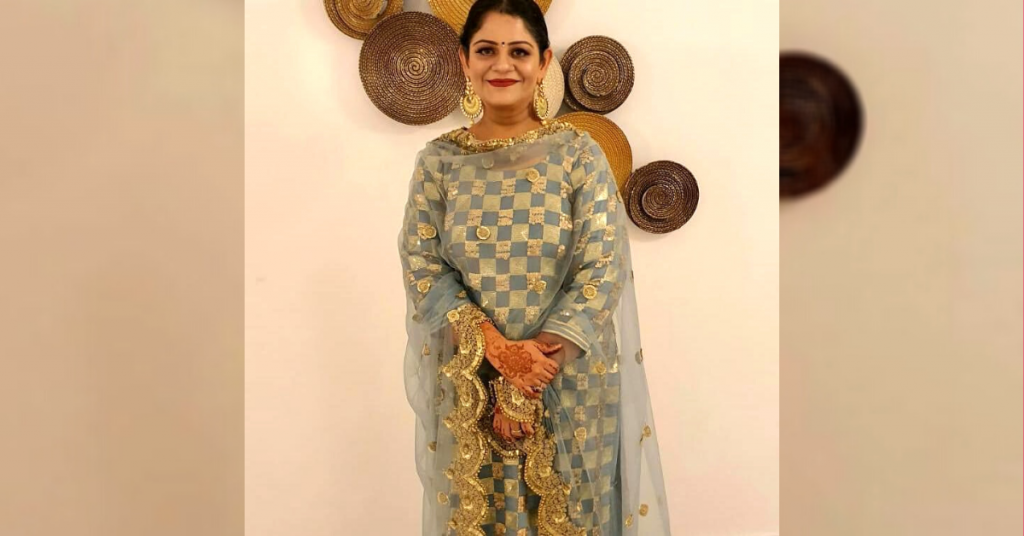 Remember the times when our mothers used to give up on their dreams so that they could build ours?

Yes, while most of them couldn’t really rebuild their dreams and found the content in their children’s’, a few of them dared to start from ground zero.

Malvika Mathur is one such mum who lived for her children first and then followed her passion and fulfilled her dream of creating something which’s not only mind-fulfilling but also sustainable and people-friendly!

Born in a close-knit joint family of the Shikohabad, Uttar Pradesh, she was a girl with big dreams but lesser options. Married at an early age, she always had this passion for designing since childhood and for keeping this passion alive, she used to create and curate clothes for several friends she made in several places due to her husband’s job.

And on moving back to India, Malvika’s daughter encouraged her to live her dream, which sprouted LabelEeshav in 2011 — a one-stop-shop for all garment requirements; interestingly named after her kids Eesha and Aarav.

“I had no formal education or training as a designer,” says Malvika, “I completed my masters in Political Science and did a diploma in Business Administration from the University of California.” “Love for my country pulled me back,” Malvika travelled across the globe due to her husband’s job before finally settling down in India in 2008.

The dream of bringing change

Being someone who always has been a curvy (overweight) person all her life, finding the perfect outfit was also a challenge for Malvika. She takes ‘body shaming’ as a person issue, a personal subject as she had to face it, faced bullying and always had to struggle due to the stereotypical world we live in. And that is what motivated her more to design clothes for the ‘real women’!

“In my journey, I have met a lot of beautiful souls who were scarred and scared and vulnerable as people had ripped them off their confidence. While designing clothes for them and making them feel confident, I felt as if I am putting a balm on my own wounds. Their smiles and confidence were my real achievements,” says the 44YO entrepreneur who encourages more women to showcase their talent.

Malvika calls it a one-stop-shop which cater from 0 months onwards — stands for sustainable fashion, eliminates the middle man and connect the consumers to the weavers directly. The idea is also to recreate and remodel existing clothes to avoid more landfill. The venture also supports small women artisans by selling their handmade accessories directly to the audience.

“It gives me immense happiness to provide a platform to these women who have creative skills but lack of mediums to bring it across due to either societal or family or marital shackles. LabellEshav is just a platform for these talented women to shine out from the convenience of their home,” Malvika continues.

The ‘passion to profession’ moment

“The colours, vibrancy arts of weaving always mesmerized me! Chanderis, Mahaeshwaris, Banarasis — they all have an unparallel elegance while the Dabu, Ajrakh, Lehariya offers so much to play around,” says the Gurgaon mother who breathed every thread of fabric all her life.

The execution was not easy, of course, but Malvika was determined to bring this up in any case. She believes in the 3Ps more than the theoretical knowledge — Passion, Patience & Perseverance. Honesty, hard work, and consistency, as she says, can take someone miles. All you need to do is to identify your niche instead of feeling insecure.

The underrated condition of ‘Handcraft’

Malvika wouldn’t be the first one telling me this! A lot of women I talked to before have confessed that people in our country do not give ‘Handcraft/ Handmade Products’ the attention, love, and value that they deserve. And probably this is why a lot of self-made artists vanish away before coming to the limelight of glory and appreciation even once.

“With Labelleshav, I wish to stand hand in hand with our weavers, get their crafts across the globe, and get them the acknowledgement & appreciation they deserve. It’s all about the connection, trust and honesty with these artisans,” Malvika further continues. With her venture, she doesn’t only want to make a full stop on the body-shaming theory but also wants to provide employment to artisans/ homemakers as much as possible.

Malvika clearly understands how much issues like body-shaming, employment or even giving up on dreams impact an individual. And thus, she prioritizes mental health more than anything. What according to her is still a taboo in a lot of Indian households and just a new buzz or fad among the millennials, is a serious issue which must not be overlooked. She works closely with an NPO named ‘youth for world peace’ to acknowledge the same.

Malvika says that most of the people in India are guided by branding due to which small businesses with equal or better quality struggles.

“I’d urge people to be more polite to service providers and request them to buy from small vendors as they struggle more,” Malvika says. “When we do not think of bargaining with brands or shops in malls, we can also give this thought of being considerate towards the local vendors. After all, even a pinch of kindness goes a long way!”

Malvika lost her father at the age of 10, but she believes he never stopped watching over and guiding her. She believes in being true to herself, her work and not living in the past or holding any regrets.

She further wants to expand her business to provide employment opportunities to more artisans and homemakers. “We are humans, and we tend to make mistakes. Let’s not pull each other down but try to extend a helping hand,” she says.

In the end, she encourages people to accept themselves as they are — despite their physical appearance. Most of the apparel on Labelleshav’s website is worn by Malvika’s daughters, Eesha & Kainat, to which she says, “I strongly believe that what my daughters can wear would be wearable and safe for anyone!” She concludes with quoting George Bernhard Shaw’s line, ‘A life spent making mistakes is not only more honourable but more useful than a life spent doing nothing.’

Infano encourages every woman to come forward, stand for each other and follow their dreams despite all the struggles and hardships. If you know someone whose story must be heard, please tag us in the comments below!