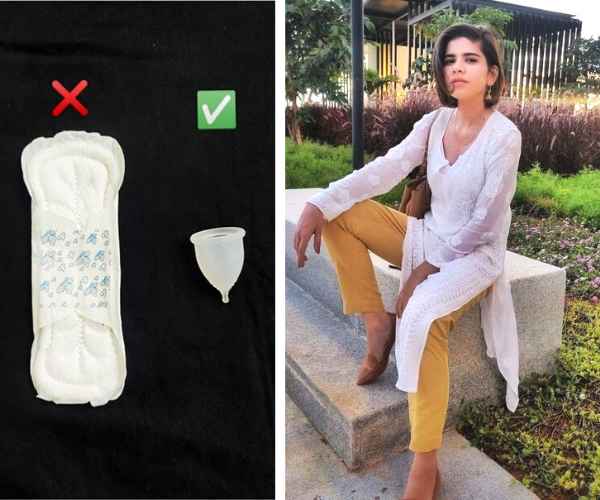 Switching to a Menstrual Cup? This Lady Will Tell You How to Ace It!

I always shuddered at the idea of using a menstrual cup!

For someone like me who has PCOS, super irregular menstrual cycle and unpredictably heavy flow, I bowed at the idea of inserting something as biggun and alien as a menstrual cup.

But little did I think of all the environmental and financial waste I was doing along with the constant need of changing the pads (remember, heavy flow)!!

For me, menstrual cups were scary; I have never even tried tampons. And while I was doing all sorts of research and PhDs on menstrual cups, I realized it’s not only me; several women like me so would have wanted to switch to a menstrual cup but would have been scared af!

So, I called this lady who is an ‘expert’ of the menstrual cups and dug out all the dos and don’ts of using it. Priyanshu, an environment enthusiast and lover of sustainable products, has been using menstrual cups for three years now and has inspired a lot of women (even her mother) to adapt the same. Here’s a quick recap of the conversation we had and the tips she shared.

When did you start using menstrual cups? And why?

I started using menstrual cups in 2018. I was going through a transition where I wanted a more sustainable lifestyle, and menstrual cups were one of the things that I was very keen on using but a little scared as well. But then a friend of mine assured me that it’s completely fine and nothing is going to be wrong while using it. So around July, I bought my first menstrual cup.

It was a little difficult initially, but I got the hold of it within a month — and I’ve been using it ever since. I actually love it! And the reason why I really like it so much is because

Convenient? As in, how?

I’ve used both tampons and pads before — you need to change tampons every 4-5 hours, and I’m not a fan of any kind of pads. But with cups, I can roam around freely. It’s easy, comfortable and you won’t feel anything down there. So, except for the enormous pain, I don’t feel like I am on my period.

It’s convenient because I have used both tampons and pads before, I can roam around freely, and I don’t feel anything down there, and it’s so easy and comfortable. So except for the pain part, I don’t feel like I am on periods.

It’s not eco friendly. It causes toxic shock syndrome (TSS), which is really dangerous. And then I have heard of instances where people have forgotten their tampons inside, which is highly dangerous. And some of the tampons’ manufactures still use bleach which is not good for the vagina. It’s so delicate and sensitive that you should not be using anything which has even a bit of chemical and pads and tampons are the worst.

Is it safe to insert it? Does it pain? Especially for someone who’d try it for the first time.

Safer than pads and tampons, I swear. Cups are made of medical-grade silicone, and there is no risk of TSS or rashes with it.

No pain at all. Women don’t realize, but the vagina is really spacious and flexible. A baby can literally come out of the vagina! A cup is nothing for it.

For the first-timers, who haven’t used a tampon before or aren’t sexually active, I would suggest them to use a little bit of lubrication while inserting it initially. Eventually, you get a hold of how to use it, and things become easier.

How often do you need to empty it?

Every 10-12 hours. But then, keep a check if you are using it for the first time.

Doesn’t it leak while you are sleeping?

In general, it doesn’t.

But initially, it did leak. There are different ways of how you put it inside, and then you have to check for the suction; you have to pull it a little bit and check if it is properly inserted. You have to furl your finger around it and see if it is not folded.

Is it able to hold heavy flow or sudden surge? And is it hygienic to keep so much blood inside you for such a long time?

Yes, it’s absolutely hygienic and much better than the pads that actually contain carcinogenic products in it. I have asked doctors about it, and they all recommend a cup instead of pads. I remember using pads as a teenager and getting rashes and sometimes infections as well.

And, when it comes to heavy flow — I am somebody who has a really heavy flow, and I can keep a small-sized cup inside for at least 10 hours.

How do you remove it? Does it spill? And what if you are not able to remove it properly?

There are different ways of removing it. It doesn’t usually happen that you fail it. You can actually sit down, squat and push it with your muscles and then pull it out with your fingers. It’s not that difficult.

You can pour it in the pot. However, I try to drain it in the drainage because sometimes the blood really doesn’t flush well. And then some people use it as a fertilizer for their plants. It depends on you.

What about the smell?

No smell. You won’t even feel like you are wearing anything!

How do you decide the size?

Every brand would give you a description of what size of the cup should you use as per your age, body weight, etc. For sexually active women, they can use a small-sized cup and women above the age of 30 or have kids can use a middle-sized cup. For example, my mother uses a medium cup.

How did you convince your mother to use a menstrual cup?

She was a little skeptical about it — about me using the cup — and herself adapting the same. Thus, took a little more time to get used to it and she couldn’t use it well for the first time, and it took her six months to get used to it.

She used to complain about the cup popping out. I guess she wasn’t inserting it properly. But later on, she figured it out herself.

Do you go for workouts, swimming or long walks?

Given the amount of pain I endure, no. But I know people who go for a swim after wearing a cup.

Any tips for women suffering from a vaginal infection or having diabetes?

I would suggest them to consult a doctor first. Because I had a vaginal infection sometimes back and it got a little bad, so my doctor recommended me not to wear it during bad periods. So, yes consult a gynaecologist anyway.

Is it okay for women who are about to reach menopause?

Is there something that you can’t do while wearing it?

Do you clean your cup every time you use it or at the end of periods? And how do you sterilize it?

I clean it every time I use it. At the end of my period, I put it in hot boiling water for 5-6 minutes and then clean it with mild soap and keep it inside a pouch after that.

I’ve kept a different pan for it, though you can use the same. And I don’t put it on the stove directly. I boil the water, keep it aside and keep the cup in it for 5-6 minutes.

And doesn’t the hot water affect the quality or elasticity?

No. It’s silicon, thus sustains in hot water. And mine is still as new as I bought it.

Any brand that you want to recommend?

How much does it cost?

And what would be a good time to replace the cup?

How can one dispose of it?

Honestly, I haven’t thought of it. Well, I do have a lot of time. But I’ll certainly trash it in the best possible way. I still have a couple of years in my hand to do that.

You would have met a lot of women asking about the cup. Why do you think they don’t use it?

One of the major reasons which even my mother was concerned about is that what if somebody who is not sexually active uses it and their hymen breaks? They won’t be virgin anymore!

This is one such major stigmas that we need to get rid of. It doesn’t work like that. Hymen is not a seal! But this is certainly one of the major reasons why women are not adapting the cup. A lot of younger women, especially!

Secondly, they think it won’t go or fit inside as it is too big; which again is not true. Thirdly, they assume that it might irritate them — you know knowing that something is down there — which is also not true because you won’t feel anything at all.

Lastly, I think the fear of spilling out the blood which certainly happens in the initial phase but then come on, you can just clean it. And it’s one of the most purest forms of the blood. That’s why it’s used as fertilizer.

Ahem, ladies! I think we are all set to switch to menstrual cups now and make the planet a little more greener and plastic-free! Did I miss any question? Drop your additional queries regarding the same, and I’ll get back to you asap.

Share your experience of using a menstrual cup in the comments below or tag us on Facebook!