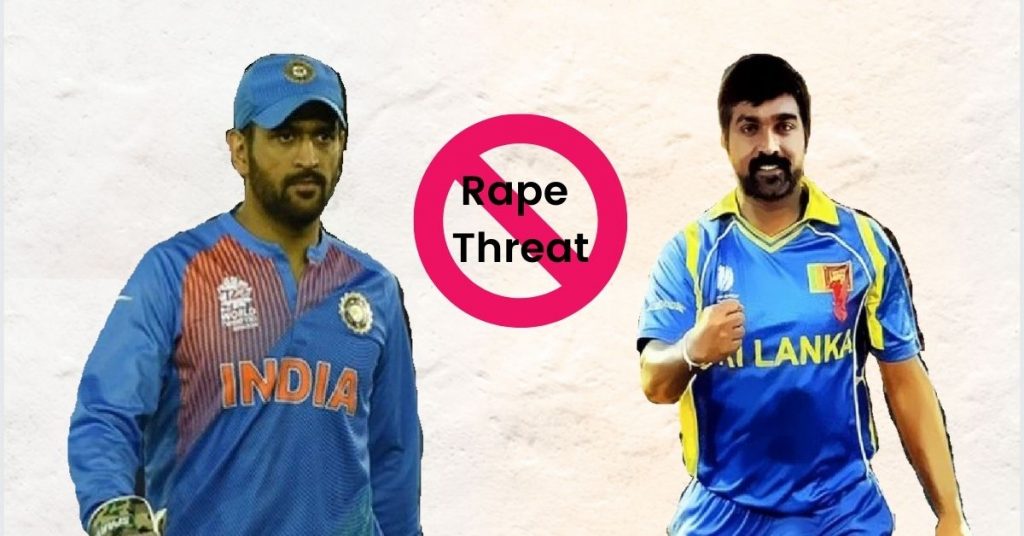 For eons, men have continuously made women the target of their anger. This is nothing new. Noticed how all bad words or galis are aimed at women? Madarchod (motherfucker), behenchod (sister fucker), chut (cunt) are the words used to derogate another hu(wo)man.

This mentality has been going on throughout history. So what’s new, I ask, when men send rape threats to women. Na, nothing new. Because for men, unleashing their masculinity over women in the form of sex is not new. In a country with high rape index, #metoo incidents, and domestic violence cases, a man sending out rape threats to women on social media is not unusual. The new low however is to target minors openly.

Last week when Chennai Super Kings lost a match to Kolkata Knight Riders, and left fans disappointed, many took to social media to troll Mahendra Singh Dhoni for his poor performance. But this crossed a low when rape threats were given to Dhoni’s five-year-old daughter Ziva.

In another incident this week, South Indian actor Vijay Sethupathi was involved in a controversy after he decided to do a biopic on Sri Lankan cricketing legend Muttiah Muralitharan. Muralitharan, is disliked in Tamil Nadu as he favoured the Sri Lankan Civil War that killed thousands of Eelam Tamils. After much hate was targeted towards Sethupathi, he pulled out of the biopic but trolls on social media made distasteful remarks about his family and issued rape threats to his daughter.

A man has hurt your ego, let’s degrade his woman. A man is not brave enough, maybe he wasn’t fed enough from his mother’s breasts (Agar maa ka dhoodh piya hai toh…) And if a celebrity doesn’t live his life according to ‘your’ values, beliefs, and expectations, let’s rape his daughter?

Who are these men?

Whoever they are, for sure they are aplenty. Such men are all around us. Where does the need to humiliate a woman for another man’s failure arise from? Is it because of a troubled mind? A bad upbringing? A traumatized childhood? What makes him think that women are punching bags? This mentality is the rape mentality. These are the same people who indulge in hitting wives, molesting and abusing the girls in their houses and outside, catcalling, teasing, and groping women on streets. These are no less than actual rapists and pedophiles, for this is probably the conditioning that takes place for a rapist to be born.

They may not be successful in their lives and their careers hence they try to feel powerful by controlling women, by knowing that they have this power to abuse their bodies and satisfy themselves. How many such men can we weed out? For it is not a one time job. They exist in millions probably. They are the result of a failed society and value system of years. Of generations that have looked at women as objects of sex and pleasure or as beings made to serve men. As the weaker sex who has to bear the brunt of men silently as a wife, a daughter, a sister.

And this mentality cannot be changed overnight. This is the job of an entire generation. And there are so many factors at play here- social, economic, cultural, religious. Unless women are respected in each of these spheres and given equal status- are treated as contemporaries and not subordinates, are seen as human beings and not boobs and vaginas– no change is going to come about.

This is why we cry feminism; this fight for equal status. So that the coming generations may not go through what we have. So that our sons grow up seeing the females around them as equals. This onus is on each one of us. To raise better men. To identify sexism and patriarchy in our own homes and around us, and to nip it at its sight. To identify such perpetrators and take them to task. To create a good social environment with better education and opportunities. To not be a maa- behen ki gaali.