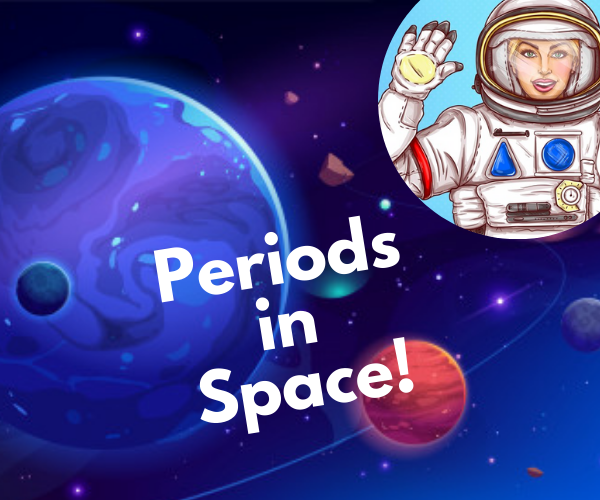 Periods In Space: How Female Astronauts Deal With Periods

Varsha Jain, a space gynecologist and visiting researcher at the Center of Human & Aerospace Physiological Sciences, King’s College London, explains in her research how it is like for female astronauts to experience a menstrual cycle in space. While the human body goes through numerous changes in space, Varsha was surprised to learn that female menstrual cycles don’t change though.

“Studies have shown that women can have periods as normally in space as they do on Earth. What’s more, menstrual blood flow isn’t actually affected by the weightlessness we experience in space, so it doesn’t float back in – the body knows it needs to get rid of it”.

Women and their periods in space were once used as an argument that women shouldn’t be astronauts. When Sally Ride became the first American woman in space in 1983, tampons and sanitary napkins were never part of that process.  But since then women have been living and working in space for decades now, and with no issues. That’s also because all available data on periods in space pertain to short-duration missions.

While periods may not hinder an astronaut’s ability, it may not be a very pleasant thing to deal with in space. Also, when astronauts undertake longer missions, how many tampons or pads a woman can carry onboard can be a huge problem given the issue of weight and cargo space that these may occupy. Carrying a three-year supply of birth control pills onboard doesn’t sound practical either.

With limited resources and water supplies, menstruating may not be a very pleasant experience. Also, not all waste disposal systems in space are designed to handle menstrual blood, as the toilet system is connected to the water reclamation system (which recycles urine into drinking water), solid waste is distributed in a cylindrical container which is then exposed to vacuum to dry the waste. Unwanted liquid waste is vented to space, hence menstrual cups may not serve the purpose not to forget the constraints for its insertion and removal. For the longest time, NASA has been inviting new ideas to facilitate recycling in space.

So what are the other options?

With these issues, most female astronauts turn to the oral contraceptives or hormone pills which may help them skip or suppress their period.

According to Varsha’s research, “The oral progesterone pill is the most popular option. The second option is an IUD (intrauterine device), which is inserted into the uterus by a doctor and can safely last for three to five years. Subdermal implants are another option, and are safe to use for up to three years. Last is the Depo-Provera, a hormone injection similar to progesterone. It must be administered once every 12 weeks, and can be safely used for two to three years.”

According to Florida’s Gynaecologist, Dr. Kristin Jackson, the best methods for suppression are either the pill or the IUD.

“It’s completely safe for women to skip their periods. Every woman is different, but some methods are more reliable than others.” However, the most reliable methods aren’t always the safest as she points out with the depo shot.

Varsha agrees. “Studies of women in the military have shown that many would like to suppress their menstrual flow during deployment, so it’s not a stretch to assume astronauts want to do the same”.