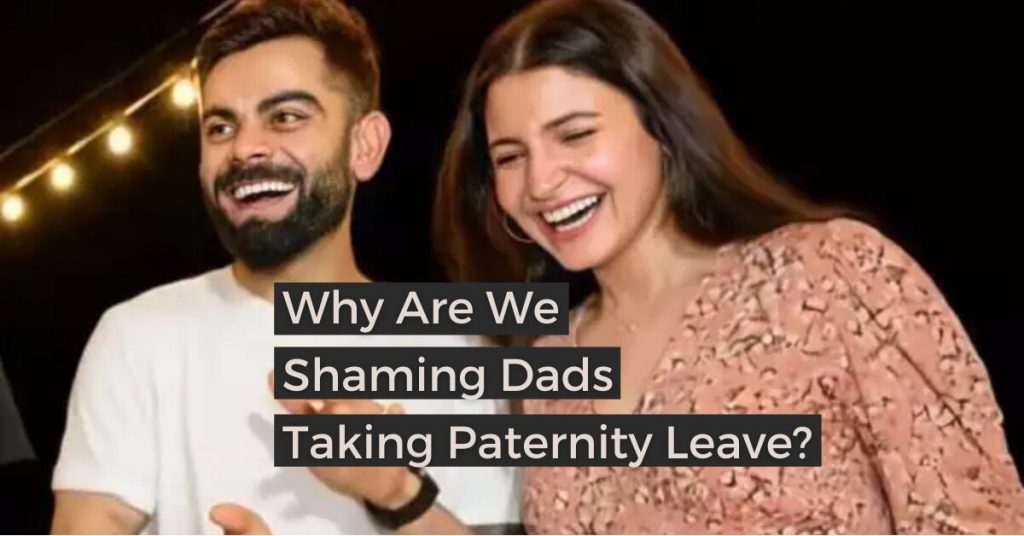 Paternity Leave Doesn’t Make You Less Of A Man, It Makes You A Better Dad

The Indian Team is all set for some cricketing action in Australia. The four-match Test series between the two teams, one of the most anticipated tournaments by cricket lovers, is expected to begin on December 17th. An announcement was made by BCCI (Board of Control for Cricket in India) that the captain of the Indian cricket team, Virat Kohli will be availing paternity leave after the series opener and returning back to India. Virat Kohli is expecting his first baby with his wife, Anushka Sharma in early 2021. This announcement has been received with mixed responses, some hailing the captain’s devotion to family and others questioning his integrity towards his country.

What is Paternity Leave?

Parental leave is a concept which aims to make the work-place more family-friendly. When there is the birth of a baby in the family, these policies allow for the possibility of taking a leave of absence – by the mother, father, or in some cases both – to take care of the child.

In India, this leave almost translates into maternal leave, where the mother takes time off from work around the time of her delivery. The Maternity Benefit (Amendment) Act, 2017 allows for pregnant women to take leave for a total of 26 weeks out of which up to 8 weeks can be claimed before delivery. This law applies to all women working in establishments with 10 or more workers.

Paternity leave is a leave of absence taken by men when expecting a baby in the family. Under Central Civil Services (Leave) Rule 551 (A), there are certain provisions for paternity leave – a central government employee can avail of a paid leave for 15 days. Many corporate companies also offer paternity leave, but this has not become a common practice yet.

We have a long-standing tradition where the mother-to-be goes to her maternal home for her delivery and then returns back well after the baby is a few months old. It is a practice that is still followed profoundly. This practice might have been relevant ages ago when women did not go to work and were burdened with household chores of big joint families and there was very less involvement of men in raising the family. Finding solace from all the hardship in their maternal homes might seem like a good option for new mothers back then, but a lot has changed now. The women of today go to work and have aspirations of a good life and career. She might not want to uproot her entire being, give up her dreams because she is a mother now. She can probably do just fine, with the support of her husband being around. Paternal leaves can aid this change, making it easier for the husband to support the new mother.

When we hear a male colleague takes off at work to care for his kid not feeling well, it’s common to hear others gossip behind his back or teasing him by calling him a “Joru ka Ghulam”. It is almost as if it is a given that caring for the kid is the responsibility of the mother. This is just the kind of judgment that prevents men from availing paternity benefits. When the mother is around, it is considered inconsequential for the man to be around – almost like it makes him less of a man if he is not able to “make” his wife take care of the baby alone.

But the fact remains that even though it’s the woman that goes through the process of delivering a baby, it doesn’t make fathers any less important. Bonding with the newborn and taking care of the baby is a responsibility that needs to be shared equally by both parents.

Since maternity leaves are a norm, there is quite often a bias against women of childbearing age, in hiring and promotion processes. They are often seen as a liability to the company and results in hiring more men than women for jobs and increased pay gaps as well. When men start opting for and using paternity leaves, it might help change the work culture to a more egalitarian one – where there is no bias among men and women employees when it comes to job security and growth prospects

Paternity Leave Is The Right Of Every Father

Studies suggest that couples in which both partners spend more time together with the baby after child-birth tend to build a stronger bond with each other. This time together makes a man more empathetic to what a new mother goes through. It helps the new mother, who has gone through a lot mentally and physically, to feel less stressed. Postpartum depression is a known occurrence and having someone close to share your problems always helps. This time allows building a strong bond with the baby, which lasts a lifetime.

Paternal leave is that opportunity for a father to start building the bond with the new baby, and for the husband to spend that much-needed time with the wife where he can show her that they are equals in everything, including sharing responsibilities.

INFANO is a website which mainly focuses on women health like how to improve fertility, their sex life, pregnancy and disorders and disease related to women hygiene. We are qualified a bunch of professionals from healthcare industry who provides you with the latest articles and post which are written by our professional content writer. These writers have vast knowledge in this field as they provide us with real life stories and facts which are shared by women about their experiences which they face.