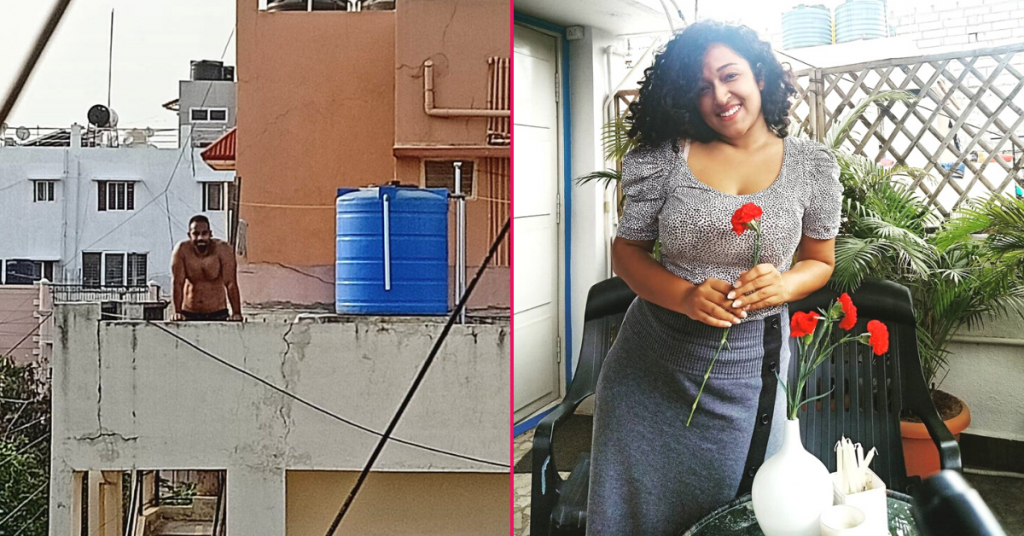 “Is flashing an offence in India?”, asks Nupur Saraswat, a Bengaluru based writer who came out for help on Instagram yesterday.

“I’ve lived in this house for over one month now. And I’ve never seen this man before. His distance/ view of my terrace is in the forth slide. He waited there for hours looking at me, which made me uneasy but not to the extent that I needed to ask him to fuck off. Then at a point when he knew I was looking, he pulled his pants down and held his penis at me. Smiling that FUCKING smile.

He is two, TWO buildings away from me. I live alone in the terrace house. I have informed my landlords. The next step is to figure out a way to get legal help. Is flashing an offence in India? Is there a helpline I can call? And how do I make sure that something happens and I am not left in a position where this person a) knows I have reported him, and b) is scot-free.

The last picture is of me, before this. Before I realized that I was about to feel very very threatened in a house, I have come to love. Before I would be shaking in anger and embarrassment (????) and second-guessing if it is my solitude that provoked him or my outfit, I could SCREAM right now, but I want to channel my anger in a tactical way. So if YOU can help me, please DM me,” posted the woman on Instagram.

So what happened next? Tons of people shared their gyaan on whether flashing is really an offence. What should a woman do if some bottlehead cannot keep his organs inside his pants?

Nupur said that people very kind enough to help her via different mediums — different NGOs, helplines including NCW & 1091, and social media accounts were suggested to her — but also a lot of them told her that it is OKAY and such cases often happens with women and that she must forget about this and move on.

But Nupur believes that this is what gives those men courage to do it more often, as they think that women are mostly afraid; and some of them even take their chuppi as a form of consent and keeps on doing more traumatic nuisance than this.

Nupur knew that this needed to be stopped. She knew that this needs some repercussions if not a legal action. She reached out to every possible helpline number of Karnataka & India, but she found that most of these numbers weren’t really helpful. “They were either out of service or not reachable. I wonder how can they still exist on Google and what would someone do if she really needs help! This is so terrifying,” she told Infano.

Nevertheless, she was determined to teach that man a lesson, and she wanted that to be quick as she wasn’t sure if he lived in that area or was just a visitor. Moreover, that one incident didn’t let her sleep whole night, and the trauma and possibility of something similar happening again was scaring her more.

After consulting with her friends, she dialled 100 which redirected her to the Koramangala Police Station and further to the Viveknagar Police Station as for the former one it was out of the jurisdiction area.

The very next day of this incident, the 4th block of Koramangala witnessed eight cops and four police vans in the area. The officers took no time in guarding out the man, and they took him to the police station to do the needful.

When asked about this, Nupur said that there was no female officer with the team, but the male officers did ask her if she wanted to take another cab/ auto. She was introduced to the lady officer on reaching the station, and she was asked whether she wanted to do press charges against the man or not. She highly recommends other women to call a lady officer while calling the police no matter what.

“I will say this, as a 5’2 woman surrounded by 4 cop cars and 8 male officers and the entirety of the neighbourhood looking at me for “what’s going on”— I don’t wish it on anyone. But i am glad I went thru it because only after it all I found out the predator had been flashing and harassing a 15-year-old in the neighbourhood too. I felt so must safer and reassured by the professional badassery of Inspector Jahida of Viveknagar station, who arrested the wee man and promised me corrective recourse and took my complaint with kindness. When this stranger tried to turn the narrative by saying I am his ex, she believed in me instead. Thanks, @blrcitypolice for getting this done before breakfast ✊🏽,” she concluded in her latest Instagram post.

Soon after this, her Instagram DM was filled with queries/ advice for similar cases, several women shared their personal experience with her, and a lot of people applauded her for this bold step.

Nupur says a part of her was unable to accept if it really happened with her — we hear so many about so many cases, but it does scare us every time we hear it from someone we know!

Though a lot of people told her that this was a normal incident, she knew it wasn’t — and no matter how hard you try not to think about, it won’t go away she says. It will scare you every time you step out, every time a man gives you a creepy look and every time you think of travelling alone.

Infano reached out to Nupur to listen to her horrific experience and we really appreciate her decision. #InfanoWomen

3 thoughts on “Man Arrested For Flashing At Bengaluru Based Writer!”