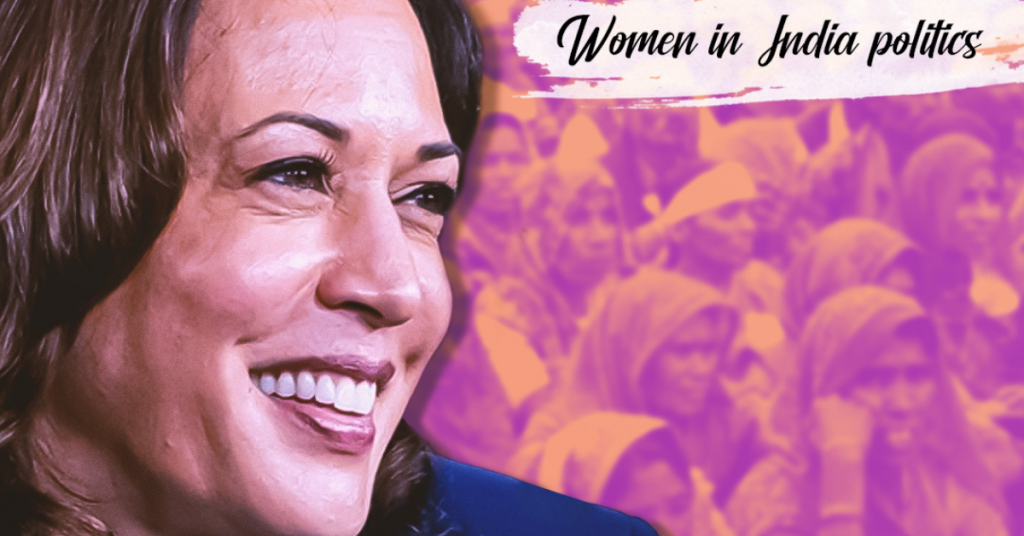 In the last few days, we have been celebrating the first woman Vice President of color -Kamala Harris – of the United States, the most powerful country in the world. This is a true victory for us, fighting for women’s equality and women empowerment. Indians have also been very vocal about their celebration of her victory, which is more special to us considering, that she has Indian roots. As we celebrate this victory of womanhood, when we look into the political scenario in India, we see a grim picture – women make up only 14% of the Parliament as of 2019, though they make up around 50% of India’s population. Furthermore, women represent only 9% in various state assemblies.

Lack of interest due to lack of inclusiveness

So, what is stopping the women to actively participate and reach higher heights in politics?

The most common answer to this is that women are not really interested in politics. But the thing to ponder here is whether girls/women get equal opportunity or an ambiance to develop this interest. We still live in a society where the education of girls is given secondary preference to her brothers, where the girl child is expected to do household chores in addition to her studies, where important issues are discussed and decisions taken by the men in the family, where the main work of a woman from a young age is still considered as cooking and tending for the family. So, does she really get the environment to develop an interest in politics – probably not?

The 73rd Amendment Act of 1992 brought about radical changes in rural governance especially with the guarantee of one-third reservation of seats for women in Panchayati elections. This was a great initiative to improve women’s participation in politics. But rural areas still face very basic problems of patriarchy, poverty, female illiteracy, male dominance. Till the time, these basic problems are eliminated, it is difficult that this one-third of reserved seats are true representatives of the people. These seats can be easily bought by offering more basic essentials in return for dummy representation. When we talk about women empowerment, the focus also needs to be on rural women whose voices have been shut down for ages.

Objectification – every day, every where

We have come across several cases in the past few years where we see women even in high positions of political parties being objectified – some for their looks, some for their dressing sense, some for their past profession. These references are mostly never even mentioned for their male counterparts. This makes one wonder how much worse things would be for women still starting up and trying to find a foothold in politics. This objectification is an indication of the regressive mindset that still exists in society. The insecurity of men when seeing their female colleague rise up the ladder exists in almost every section of our society, but more so in areas that have been pre-dominantly male-dominated, like politics.

Research suggests that women legislators in India raise economic performance in their constituencies by about 1.8 percentage points per year more than male legislators. Studies also confirm that women are less likely to be corrupt with regards to their male counterparts. Recently, we have seen the efficiency with which Covid situations have been handled by nations like New Zealand and Germany which are headed by women in comparison to other countries. In spite of this, there is still a reluctance in society to accept the capabilities of women. Acknowledging the role and vision of women in improving the socio-economic condition of a country is often underplayed and not accepted.

India was one of the countries in the world, which was headed by a woman, when it was almost unthinkable for many other countries, even the most developed one. Even in the current day political scenario, we have several strong women personalities – Nirmala Sitharaman – Minister of Finance, Smriti Irani – Minister of Textiles, Minister of Women and Child Development Sonia Gandhi – President of the Opposition party, Mamata Banerjee – Chief Minister of Bengal to name a few. However, the fact remains that these women remain largely anomalies in the Indian political scene rather than the norm. Studies show that for women to have a meaningful impact in Parliament, they need to reach at least a 30% threshold. We are still far away from this number, but hopefully, we will reach there soon in order to fulfill the dream of a gender-equal India.