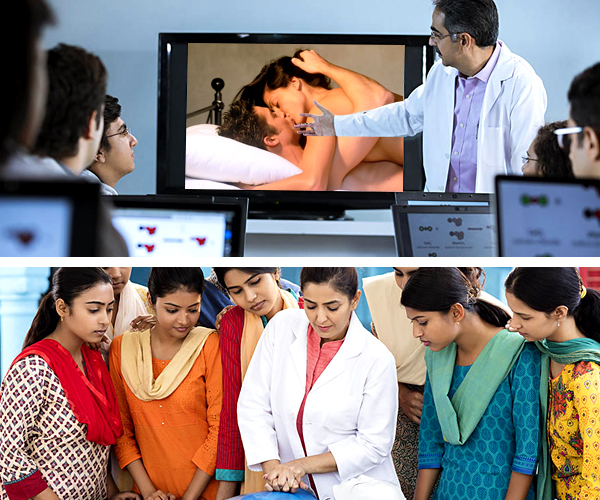 “Latika, wiped her tears on her shawl as she finished narrating her fears to her best friend of being pregnant now that she’d been ‘close’ with her lover. “

But, the fact remains that one CANNOT get pregnant just by kissing. A fact Latika was unaware of, and she’s not alone. Many young adults of both the sexes with such limited knowledge are a testimony to the pitiful state of sex education in India, despite sex being a natural and almost inevitable part of life. It’s ironic to see that Sex and anything related to it is a taboo, especially, when it affects everyone’s lives in so many different ways.

Beginning with the early years of the teens, we were introduced to a plethora of feelings hitherto unknown, so it is imperative that proper guidance is given because devoid of such guidance from appropriate sources, teens seek help usually from the wrong sources, like their friends who themselves aren’t aware of the right facts or from the Internet, which without a doubt is misleading in ways more than one can imagine, especially to a young adult. This leads to these teens growing up with no or wrong knowledge about sex.

Also, sex education encompasses Sexual health, which is another critical issue to be aware of. Sexually Transmitted Diseases (STDs) like AIDS, Syphilis, Gonorrhea, etc. can be prevented from spreading with proper education about condoms and its proper usage.

According to “the quint” India has 16 million teenage mothers which is a shocking 11% of the world total. The shamefully high number can be attributed to the fact that 27% of the girls are married before their 18th birthday, according to the National Family Health Survey. Now, doesn’t it bother you that almost all these girls enter their married life with pretty much no knowledge about sex or its related issues? Not to mention the pressure of becoming a mother that mounts her when she herself is not even legally an adult.

Also, the knowledge of men regarding menstruation is also pathetic. For most men, menstruation is simply 5 days where the girl is ‘impure’ and should ‘stay away from people.’ In fact, such ignorance has led to women using rags, sand, and even ashes to absorb their menstrual blood.

With sex education, we can also address the issues of unwanted pregnancy and contraception, which is again a very alien subject for a large number of teens. Team this up ‘no idea of Sexual health ‘ and presto! You have the perfect recipe to bomb your health and even risk your life.

Sex education, while addressing the medical aspects of sex, can also be used to target the ethical aspects too. With proper sex education, teens know what these newfound feelings are, and also they have a proper person to go to with their problems. This reduces the risk of young adults resorting to the Internet and eventually, even pornography to satisfy their curiosity. This can have a very negative impact on their minds as it can cultivate unnecessary ideas which can culminate in the form of the tragic ‘Nirbhaya’ rape case.

It is very clear by now about the significance of sex education and its sorry state can be connected to the fact that sex usually shuts people up in the name of decency, morality, and what not! But, the fact is, the more we close our eyes and pretend blind to this situation, the more “indecent” it will get.

Instead, teachers and parents should be sensitized to these issues and the generation gap between the children and parents should not be a hurdle that makes a child prefer a half-knowledge friend over their own parents and teachers.

So here’s to hoping for a Latika who is confident and educated in the ‘basics’ of human nature.